A folded Mavic Air drone is about half the size of a Mavic Pro and more than 40 percent lighter. It’s shorter, about the same width, and less than 2 inches tall. That’s why it’s so easy to take anywhere and record your experiences, whether you carry it in a backpack, pocket or purse. The Mavic Air foldable drone won’t weigh you down: It weighs a mere 0.94 pound—about 0.7 pound less than the Pro.

The DJI Mavic Air Drone, like its big brother, folds for storage and easy transport, but it does so in about half the space. Propellers remain mounted atop the four arms, which fold against the body and store efficiently during transport. There’s no need to mount props before each flight.

You may occasionally check your bag or your pocket to make sure you stashed your Mavic Air Drone away. That’s understandable, given its folded size of just 6.61x3.26x1.92 inches and its total weight of just under a pound.

Don’t be misled by Mavic Air Drone's compact size. Despite having a footprint not much larger than that of a smartphone, it has big capabilities. Mavic Air Drone has a top speed of 42.5 mph, faster than the Pro. It can fly about 21 minutes on a single charge, exceeding 6 miles of travel. Able to resist winds of up to 24 mph, Mavic Air Drone is stable, even while hovering.

Mavic Air Drone remembers the safe route it just traveled, so you can command it to Return to Home and it will get back to you without incident. If battery power falls to dangerously low levels, or if you fly beyond the reach of the controller’s commands, Mavic Air Drone will automatically activate Return to Home.

Stills are a sharp 12MP. The HDR mode (High Dynamic Range) provides greater luminosity and extra detail in low and high light situations. It’s easier and quicker to automatically get the correct exposure in extreme light. Dark areas in photos are less muddy, and light areas have more contrast—even in the same frame. Bursts can be shot at 3/5/7 fps.

Moving and still images are recorded on 8GB of internal memory. Need more storage? A slot accepts Micro SD cards of up to 128GB—bigger than on many drones that sell for twice the price, and more than on any drone that’s similarly priced.

The camera’s field of view is a wide 85 degrees, equivalent to a 24mm lens in 35mm format. The CMOS sensor is 1/2.3 inch, the same as on many larger drones.

Several modes help you shoot more dynamic aerial video and photos. Like the Pro, Mavic Air Drone has QuickShots, a selection of settings that allow you to video record a subject while the drone flies programmed acrobatics that you select. Mavic Air Drone has Rocket, Dronie, Circle and Helix settings that carry over from the Mavic Pro, plus two new modes: Asteroid, which records a 360-degree spherical image before zooming in on the start point, such as a building or statue, and Boomerang, which records a 360-degree spin around the pilot before zooming in.

ActiveTrack, the DJI program that has always locked onto and followed a subject, video recording or photographing it, now can sense and follow multiple subjects. It’s easier to more precisely identify onscreen the targets to be followed. The improved ActiveTrack makes this compact drone a perfect choice for recording activities such as jogging, biking, rowing and swimming.

SmartCapture obeys gesture commands that are simple for the operator to learn. It allows the pilot to command the drone to take off, follow a subject, shoot, record or land, all without using the controller. And yes, it still takes gesture-commanded selfies.

The Advanced Pilot Assistance Systems enable Mavic Air Drone to fly forward while automatically avoiding obstacles by going around or over them. Mavic Air Drone has sensors in front, on top and below to improve safe flying. Terrestrial recognition is improved.

Like the Mavic Air Drone itself, the included remote controller is compact and folds so it doesn’t take up much space. The twin joysticks come off  for storage inside the controller. And remember, for short flights, the controller isn’t even needed, with a smartphone or tablet and free downloadable software capable of commanding the drone.

When linked with a smartphone or tablet, the remote receives live video transmission in 720p from Mavic Air Drone from a distance up to 2.5 miles. The range of commands to the drone also is 2.5 miles. Mavic Air Drone can be used with DJI Goggles, for a fully immersive flight experience.

A marvel of engineering and design, the Mavic Air was built to go wherever adventure takes you. Inheriting the best of the Mavic series, this ultraportable and foldable drone features high-end flight performance and functionality for limitless exploration. 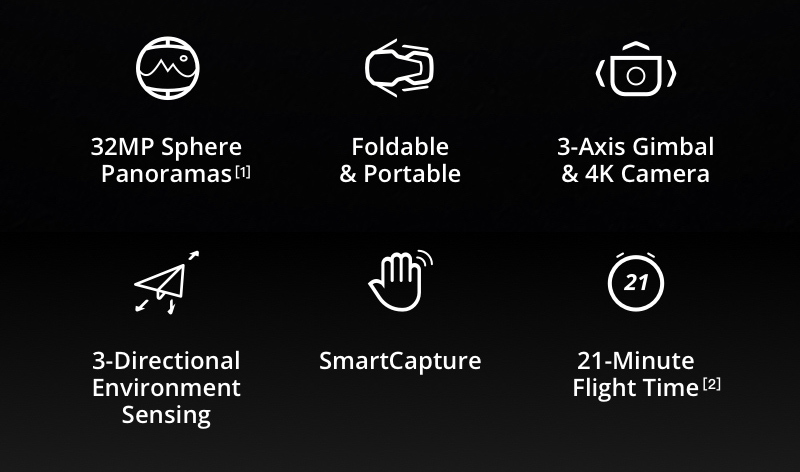 The Mavic Air drone is the most portable DJI drone to house a 3-axis mechanical gimbal, with its angular vibration range reduced to 0.0005 degrees. Set in a triangular formation, gimbal dampeners help create even steadier shots.

The Mavic Air's onboard camera integrates a 1/2.3" 12 megapixel CMOS sensor and an f/2.8 lens with a 35 mm-equivalent focal length of 24 mm to shoot high-quality photos and videos. 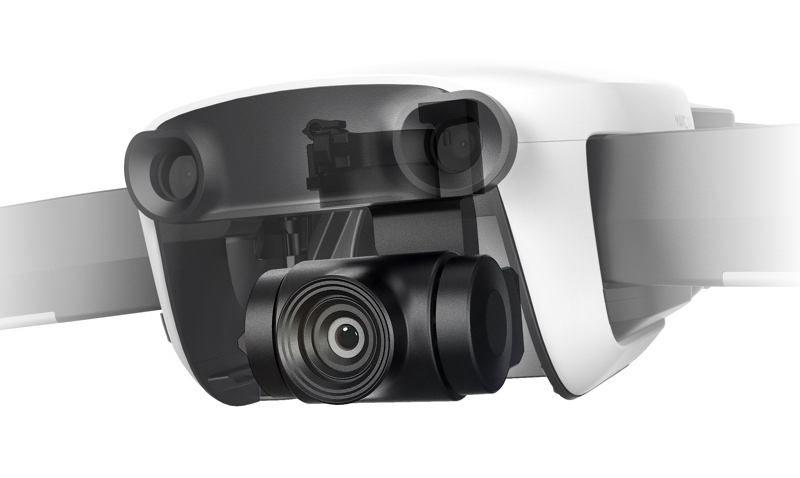 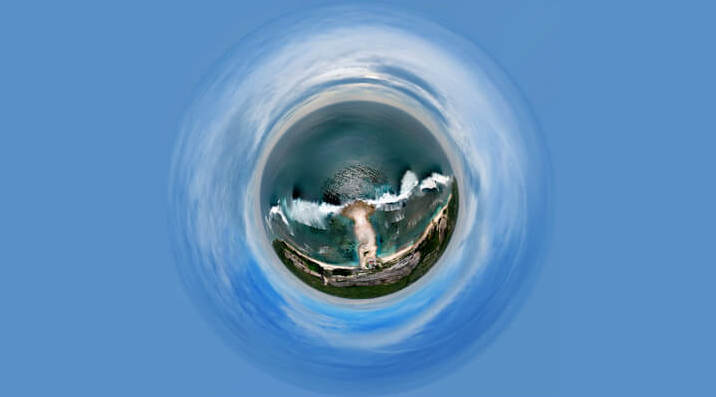 In addition to Horizontal, Vertical, and 180° panoramas, the Mavic Air stitches 25 photos together in just eight seconds to create crystal-clear 32 MP Sphere panoramas. View them from an immersive perspective with DJI Goggles.

The Mavic Air drone shoots video at an incredible 4K 30 fps, recording at 100 Mbps to capture every second with UHD quality. 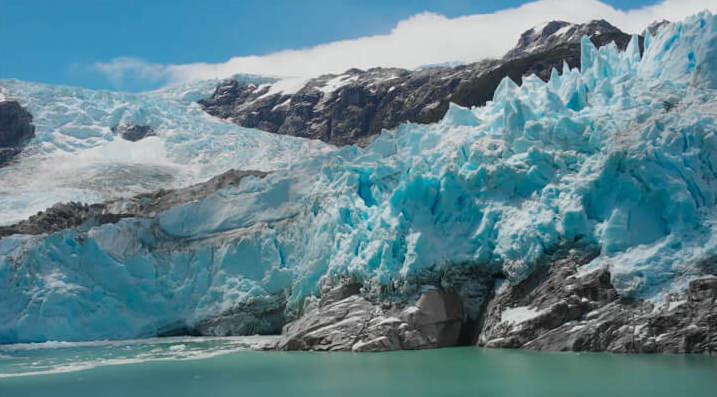 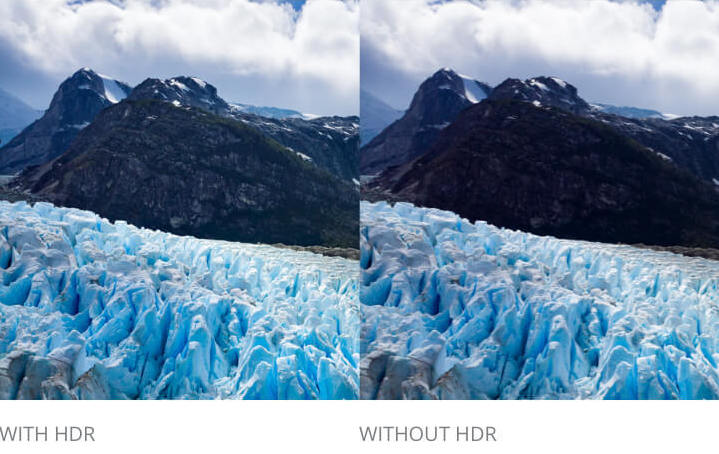 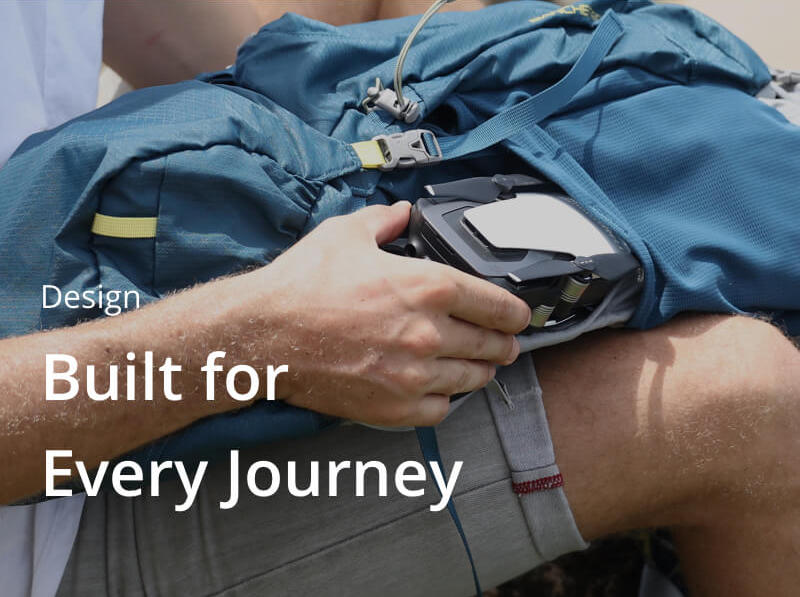 In addition to a Micro SD card slot, 8 GB of internal storage let you save photos and videos directly tothe aircraft and export files through its USB 3.0Type-C port.

The Mavic Air’s onboard camera integrates a 1/2.3”12-megapixel CMOS sensor and an f/2.8 lens with a35-mm equivalent focal length of 24 mm to shoot high-quality photos and videos. 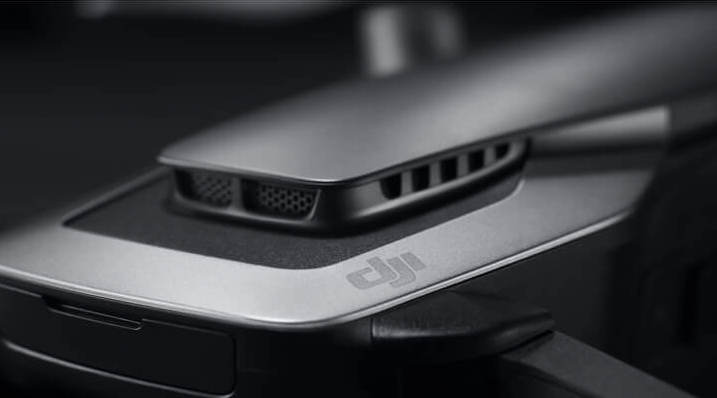 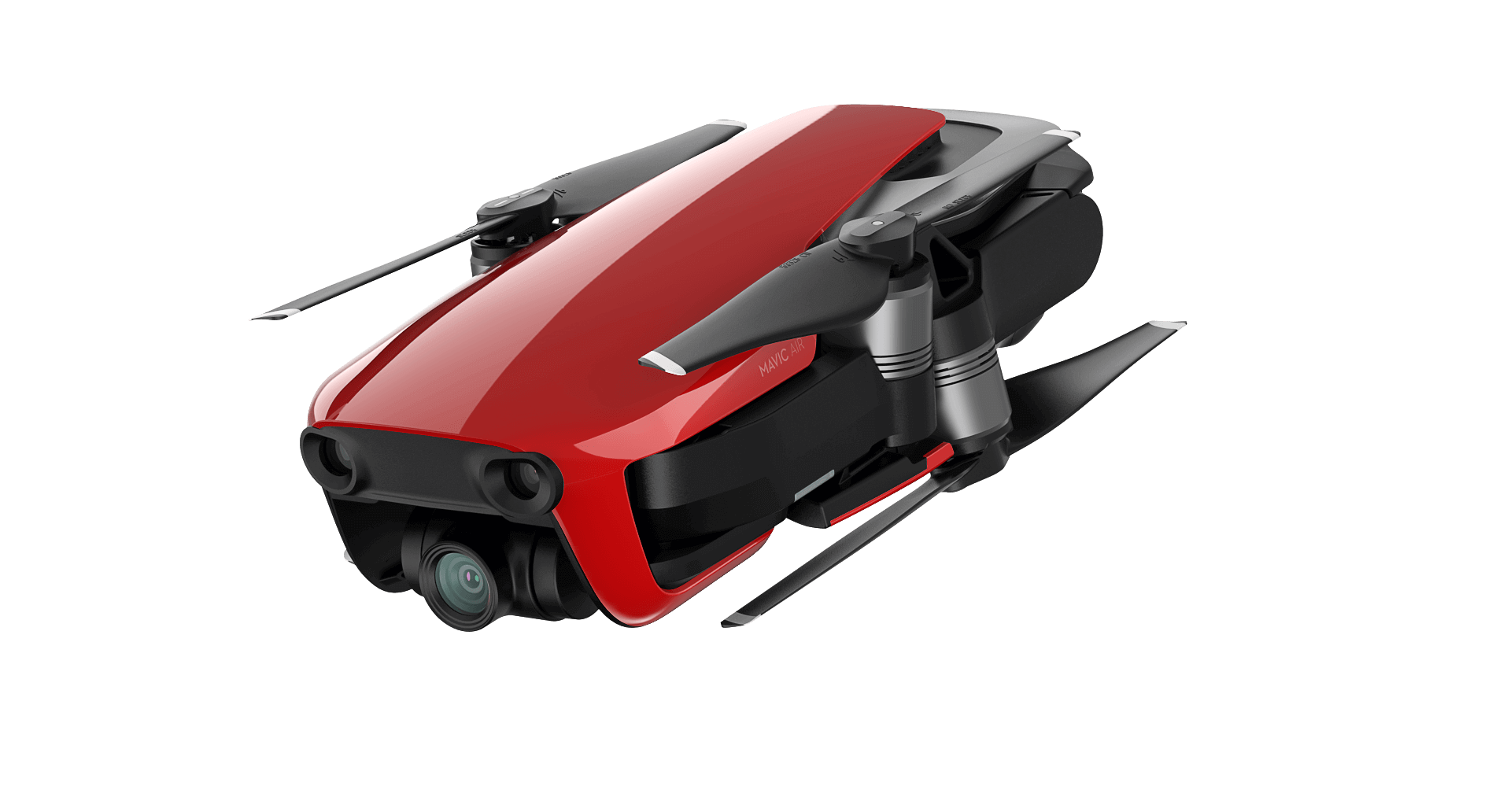 As tall and wide as a smartphone when folded, the Mavic Air is an ultraportable drone that stretches the boundaries of what's possible for a device its size.

The dedicated remote controller uses a foldable, low-profile, ergonomic design to hold your smartphone for maximum convenience. Detachable control sticks store inside the remote controller to pack more comfortably on the go. 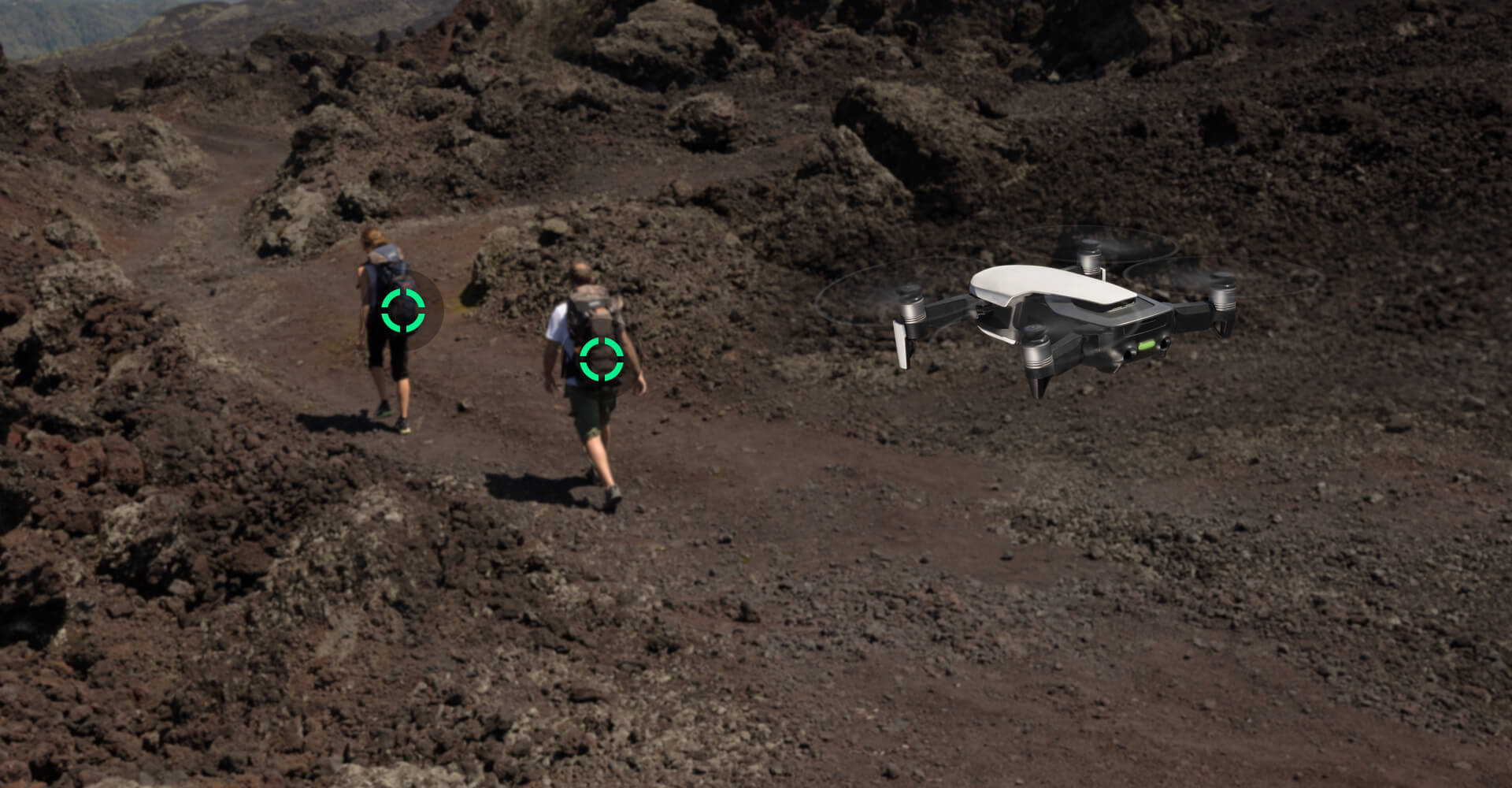 ActiveTrack can sense up to 16 selectable subjects simultaneously,2 letting you choose the right tracking subject. With higher tracking precision and broader scenario applications, ActiveTrack follows targets even when they're running, jumping, or cycling. 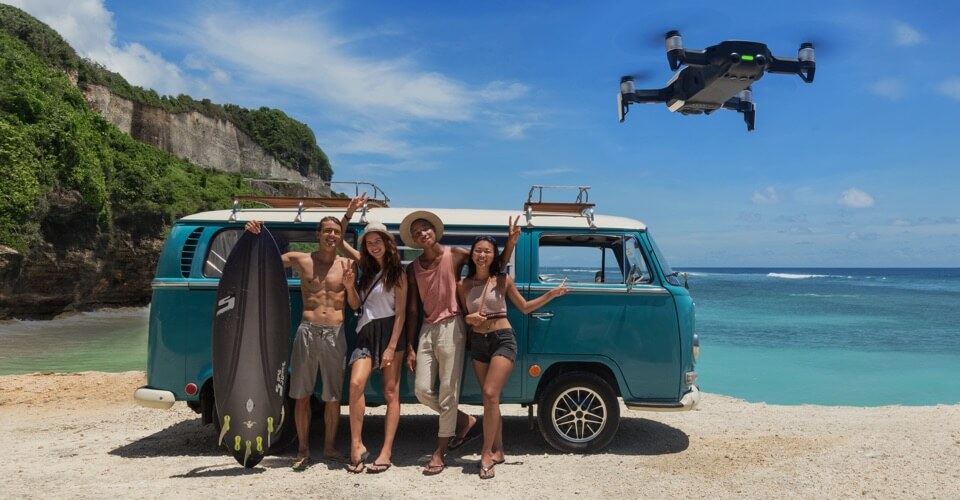 Fun, simple, and intuitive, SmartCapture offers a new and interactive way of controlling the Mavic Air by hand. Launch and control the drone with hand gestures, then take photos or videos however you like. 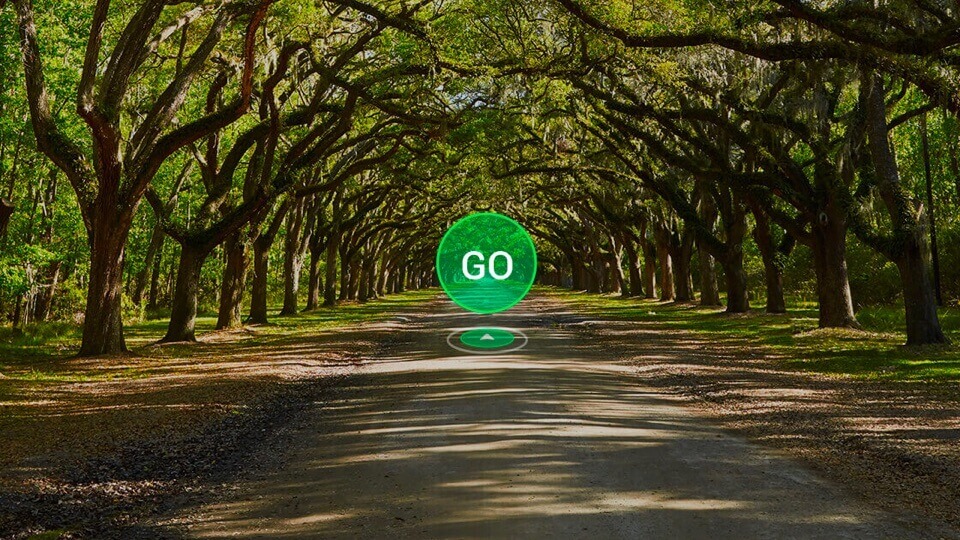 If you want to focus on just your shot, select TapFly in DJI GO 4, which lets you fly wherever you tap on your mobile device screen. TapFly works in Forward, Backward, Free, and Coordinate modes, and you can adjust flight speed to suit all your aerial needs.

Using advanced VIO technology, the powerful sensor system in FlightAutonomy 2.0 consists of a primary gimbal camera, forward, backward, and downward dual-vision sensors, downward infrared sensing system, IMU redundancies, and a group of computing cores. Together, they collect and transmit information from the surrounding environment to the high-performance processor for more precise hovering and better flight performance. Advanced Pilot Assistance Systems (APAS) allow the aircraft to bypass obstacles in front of and behind it actively. Your grand adventures of discovery have never been so safe and easy.

Flight Performance - The Thrill of Flight

Pair the Mavic Air with the DJI Goggles for FPV flight, and take to the skies for an immersive aerial adventure!

Mavic Air Intelligent Flight Batteries are made with high-density lithium, offering a substantial flight time of up to 21 minutes for all your adventuring needs.

The application of FOC sinusoidal drive architecture ESCs provides the Mavic Air with a smoother motor commutation process and higher overall efficiency of both motors and ESCs.

Feel the rush and thrill of first-class drone flight with top speeds of 68.4 kph4 in Sport mode.

A new Wi-Fi video transmission system supports dual frequency bands of 2.4/5.8GHz6 and a 720p live view from up to 4 km away.

Get the DJI Mavic Air drone today and begin your thrilling adventures in the sky! 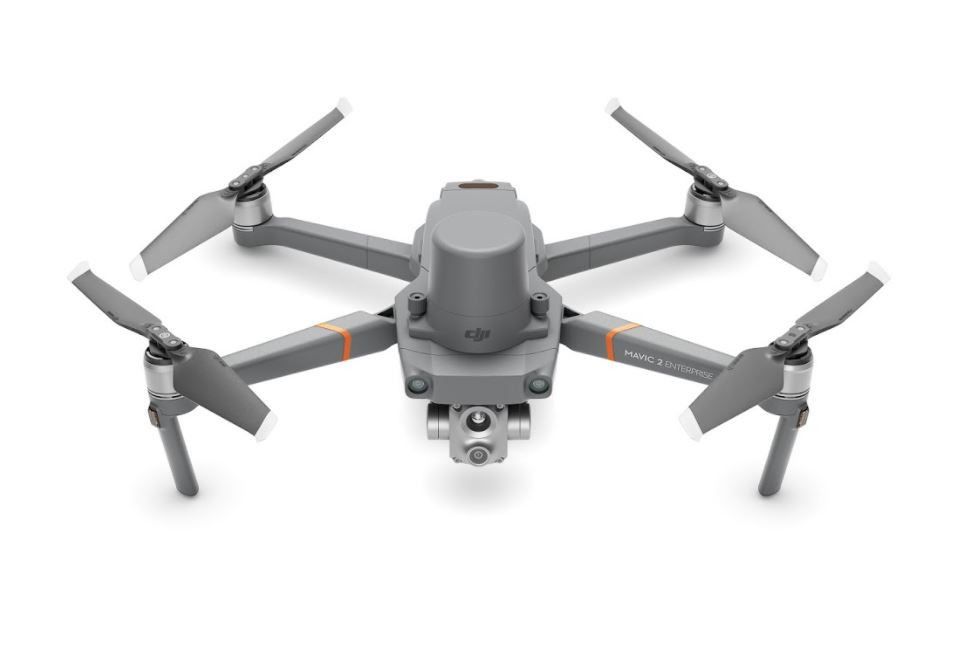